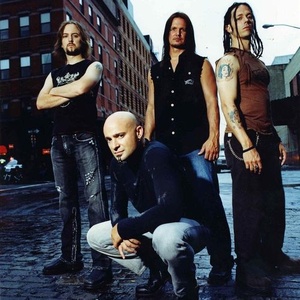 Upcoming events: 1
Subscribers:  37
My Rock Shows — search for concerts and buy tickets in more than 50 countries.
Join us

Here you can find all upcoming Disturbed concerts. If the concert schedule is not right, please contact us and we will add a gig of Disturbed in 2021 or 2022 in our database.

Click the "Subscribe" button and get notified by MyRockShows about Disturbed upcoming events. Explore this page to find details of upcoming events of Disturbed, including the venue address and tickets cost.

Please contact us in case you see a mistake in Disturbed events dates or if MyRockShows is leaving out any of Disturbed upcoming gigs.

Disturbed is an heavy metal band from Homer Glen, Illinois, formed in 1996. The band includes vocalist David Draiman, bassist John Moyer, guitarist Dan Donegan, and drummer Mike Wengren. Former band members are bassist Steve Kmak and vocalist Erich Awalt.
The band has released six studio albums, five of which have consecutively debuted at number one on the Billboard 200. Disturbed went into hiatus in October 2011, during which the band's members focused on various side projects, and returned in June 2015, releasing their first album in four years, Immortalized, on August 21, 2015.

Alternative Rock Post-Grunge
They are subscribed to this band