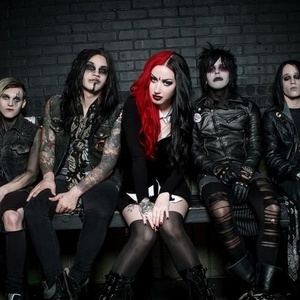 Here you can find all upcoming New Years Day concerts. If the concert schedule is not right, please contact us and we will add a gig of New Years Day in 2021 or 2022 in our database.

New Years Day is an American rock band formed in 2005 in Anaheim, California. After building a reputation strictly through promotion on the social networking website MySpace, the band released its debut self-titled EP in 2006 and their first full-length album My Dear in 2007. Six years after their initial debut, Victim to Villain was finally released, shortly followed by Malevolence in 2015. Malevolence peaked at #45 on the Billboard 200, the band's highest charting thus far.
New Years Day's music is self-proclaimed as "Hauntedmansioncore", a genre categorized by eerie haunted mansion sounds mixed with hard rock music.