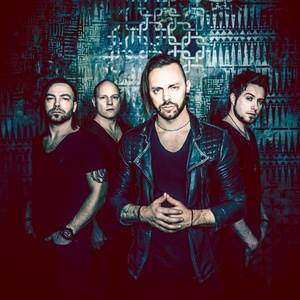 Upcoming events: 28
Subscribers:  69
My Rock Shows — search for concerts and buy tickets in more than 50 countries.
Join us
Sign in
Follow us on social media

About Bullet For My Valentine

Bullet for My Valentine, often abbreviated as BFMV or B4MV, are a Welsh heavy metal band from Bridgend, formed in 1998. The band is composed of Matthew Tuck (lead vocals, rhythm guitar), Michael Paget (lead guitar, backing vocals), Michael Thomas (drums) and Jamie Mathias (bass guitar). Former members include Nick Crandle and Jason James; both were on bass. They were formed under the name Jeff Killed John and started their music career by covering songs by Metallica and Nirvana. Jeff Killed John recorded six songs which were not released; two of these tracks were reworked later in their career as Bullet for My Valentine. Financial difficulties dictated the name change, which was followed by a change in music direction. In 2002, the band secured a five-album deal with Sony BMG. The band has stated that their music is influenced by classic metal acts such as Metallica, Iron Maiden and Slayer. The band is part of the Cardiff music scene.
Bullet for My Valentine's debut album, The Poison, was released on 3 October 2005 in the United Kingdom and on 14 February 2006 in the United States to coincide with Valentine's Day, in a nod to the band's name. The album entered the U.S. Billboard 200 at number 128. It was certified gold by the Recording Industry Association of America. The band made appearances at the Download Festival and Kerrang! XXV, and undertook a U.S. tour with Rob Zombie. Bullet for My Valentine's second studio album, Scream Aim Fire, was released on 29 January 2008 and debuted at number four on the Billboard 200. The band's third album, Fever, was released on 26 April 2010 and debuted at number three on the Billboard 200. On February 8, 2013, the band released their fourth studio album, Temper Temper, which peaked at number 13 on the Billboard 200. The band has sold over one million albums in the United States and over 5,000,000 albums worldwide and are the most-successful act in the Kerrang! Awards category of "Best British Band" with three wins.

Alternative Metal Groove Metal
They are subscribed to this band