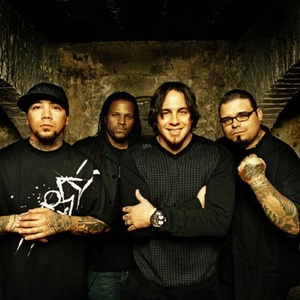 Upcoming events: 15
Subscribers:  48
My Rock Shows — search for concerts and buy tickets in more than 50 countries.
Join us
Sign in
Follow us on social media

Here you can find all upcoming P.O.D. concerts. If the concert schedule is not right, please contact us and we will add a gig of P.O.D. in 2022 or 2023 in our database.

Click the "Subscribe" button and get notified by MyRockShows about P.O.D. upcoming events. Explore this page to find details of upcoming events of P.O.D., including the venue address and tickets cost.

Payable on Death (abbreviated P.O.D.) is a Christian nu metal band formed in 1992 and based in San Diego, California. The band's line-up consists of vocalist Sonny Sandoval, drummer Wuv Bernardo, guitarist Marcos Curiel, and bassist Traa Daniels. They have sold over 12 million records worldwide. Over the course of their career, the band has received three Grammy Award nominations, contributed to numerous motion picture soundtracks and toured internationally. With their third studio album, The Fundamental Elements of Southtown, they achieved their initial mainstream success; the album was certified platinum by the RIAA in 2000. Their following studio album, Satellite, continued the band's success with the singles, "Alive" and "Youth of the Nation", pushing it to go triple platinum.