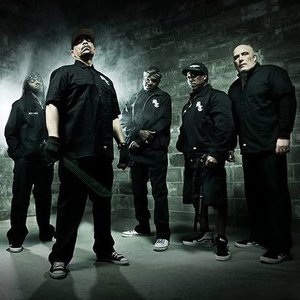 Here you can find all upcoming Body Count concerts. If the concert schedule is not right, please contact us and we will add a gig of Body Count in 2021 or 2022 in our database.

Body Count is an American heavy metal band formed in Los Angeles, California, in 1990. The group is fronted by Ice-T, who co-founded the group with lead guitarist Ernie C out of their interest in heavy metal music. Ice-T took on the role of vocalist and writing the lyrics for most of the group's songs. Lead guitarist Ernie C has been responsible for writing the group's music. Their controversial self-titled debut album was released on Sire Records in 1992.
The song "Cop Killer" was the subject of much controversy. Although Sire Records' parent company, Warner Bros. Records, defended the single, Ice-T chose to remove the track from the album because he felt that the controversy had eclipsed the music itself. The group left Sire the following year. Since then, they have released four further albums on different labels, none of which have been received as commercially or critically well as their debut album.
Three out of the band's original six members are deceased: D-Roc died from lymphoma, Beatmaster V from leukemia and Mooseman in a drive-by shooting.