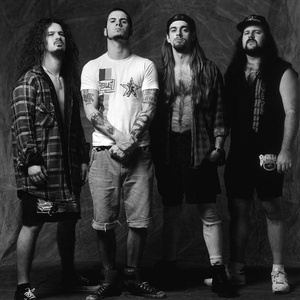 Upcoming events: 31
Subscribers:  3
My Rock Shows — search for concerts and buy tickets in more than 50 countries.
Join us
Sign in
Follow us on social media

Here you can find all upcoming Pantera concerts. If the concert schedule is not right, please contact us and we will add a gig of Pantera in 2022 or 2023 in our database.

Click the "Subscribe" button and get notified by MyRockShows about Pantera upcoming events. Explore this page to find details of upcoming events of Pantera, including the venue address and tickets cost.

Pantera (/pænˈtɛrə/) is an American heavy metal band from Arlington, Texas, formed in 1981. The group's best-known lineup consisted of the Abbott brothers (drummer Vinnie Paul and guitarist Dimebag Darrell), along with bassist Rex Brown and lead vocalist Phil Anselmo; the former, who joined in 1982, is the sole constant member of Pantera. In addition to their development and popularization of the groove metal subgenre, Pantera is credited (along with others, such as Testament, Sepultura, and Machine Head) for being part of the second wave of thrash metal scene from the late 1980s to early-to-mid 1990s. Pantera is regarded as one of the most successful and influential bands in heavy metal history, having sold around 20 million records worldwide and having received four Grammy nominations.

Having started as a glam metal band, Pantera released three albums in the mid-1980s with lead vocalist Terry Glaze (Metal Magic, Projects in the Jungle, and I Am the Night), with little success. Looking for a new and heavier sound, Pantera hired Anselmo in 1986 and released Power Metal in 1988. They secured a record deal with major label Atco the following year. Their fifth album (in which the band has since referred to as their official debut album), 1990's Cowboys from Hell, popularized the groove metal genre, while its 1992 follow-up Vulgar Display of Power achieved an even heavier sound and increased their popularity. The subsequent album Far Beyond Driven (1994) then debuted at number one on the Billboard 200.

Tensions began to surface among the band members when Anselmo became addicted to heroin in 1995; he almost died from an overdose in 1996. These tensions resulted in the recording sessions for The Great Southern Trendkill (1996) being held separately. The ongoing tension lasted for another seven years, during which only one studio album, Reinventing the Steel (2000), was recorded. Pantera went on hiatus in 2001 but lingering disputes led to the band breaking up in 2003. The Abbott brothers went on to form Damageplan while Anselmo continued to work on several side projects, including Down, which Brown joined as well.

On December 8, 2004, Dimebag Darrell was shot and killed on stage by a mentally unstable fan during a Damageplan concert in Columbus, Ohio. Vinnie Paul went on to form Hellyeah after his brother's death, and died of heart failure in 2018, leaving Brown and Anselmo as the only surviving members of the band's best-known lineup. In July 2022, it was announced that Brown and Anselmo will reunite in 2023 for Pantera's first tour in 22 years, with Zakk Wylde and Charlie Benante filling in for the Abbott brothers on guitar and drums, respectively.[

Thrash Metal
They are subscribed to this band in