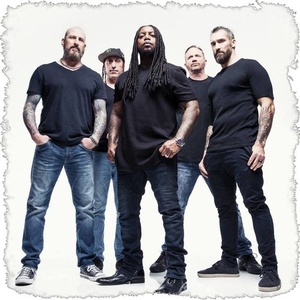 Upcoming events: 22
Subscribers:  16
My Rock Shows — search for concerts and buy tickets in more than 50 countries.
Join us
Sign in

Here you can find all upcoming Sevendust concerts. If the concert schedule is not right, please contact us and we will add a gig of Sevendust in 2022 or 2023 in our database.

Click the "Subscribe" button and get notified by MyRockShows about Sevendust upcoming events. Explore this page to find details of upcoming events of Sevendust, including the venue address and tickets cost.

Sevendust is an American alternative metal band from Atlanta, Georgia, formed in 1994 by bassist Vince Hornsby, drummer Morgan Rose and guitarist John Connolly. After their first demo, lead vocalist Lajon Witherspoon and guitarist Clint Lowery joined the group. Following a few name changes, the members settled on the name Sevendust and released their self-titled debut album on April 15, 1997. They have attained success with three consecutive RIAA gold certified albums and have sold millions of albums worldwide.
The self-titled album sold 311 copies in its first week. However, through touring and TVT support, the album gained charting success through Billboard and earned a gold certification. Since formation, Sevendust has released ten studio albums, earned additional charting success and gold sales certifications. They have also re-released their self-titled album as Sevendust: Definitive Edition which contains five new tracks and a DVD.

Post-Grunge Alternative Rock
They are subscribed to this band