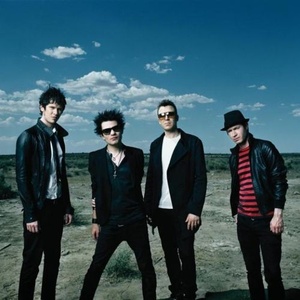 Subscribers: 116
Share with friends
My Rock Shows — search for concerts and buy tickets in more than 50 countries.
Join us
Sign in
Follow us on social media

Here you can find all upcoming concerts of Sum 41. You can see the concert schedule of Sum 41, buy tickets and find out the addresses of venues.

If the tour dates of Sum 41 are not right, please contact us and we will add the events in our database.

Sum 41 is a Canadian rock band from Ajax, Ontario. Originally called Kaspir, the band formed in 1996 and currently consists of lead vocalist/rhythm guitarist/keyboardist Deryck Whibley, lead guitarist/backing vocalist Dave Baksh, rhythm/lead guitarist/keyboardist/backing vocalist Tom Thacker, bassist/backing vocalist Jason McCaslin and drummer Frank Zummo.
In 1999, Sum 41 signed an international record deal with Island Records and released its first EP, Half Hour of Power, in 2000. The band released its debut album, All Killer No Filler in 2001. The album achieved mainstream success with its first single, "Fat Lip", which reached number one on the Billboard Modern Rock Tracks chart and remains the band's most successful single to date. The album's following singles "In Too Deep" and "Motivation" also achieved commercial success. All Killer No Filler was certified Platinum in the United States, in Canada and in the United Kingdom. In 2002, the band released Does This Look Infected?, which was also a commercial and critical success. The singles "The Hell Song" and "Still Waiting" both charted highly on the modern rock charts. The band released its next album, Chuck, in 2004, led by singles "We're All to Blame" and "Pieces". The album proved successful, peaking at No. 10 on the Billboard 200 and sold five million copies worldwide. In 2007, the band released Underclass Hero, which was met with a mixed reception, but gained some commercial success, becoming the band's highest charting album to date. It was also the band's last album on Aquarius Records. The band released the album Screaming Bloody Murder, on Island Records in 2011 to a generally positive reception, though it fell short of its predecessors' commercial success. The band's sixth studio album, entitled 13 Voices was released on October 7, 2016. Up to 2015, the band has sold 30 million albums worldwide.
The band often performs more than 300 times each year and holds long global tours, most of which last more than a year. The group has been nominated for seven Juno Awards and have won twice (Group of the Year in 2002 and Rock Album of the Year for Chuck in 2005). Sum 41 was nominated for a Grammy Award for Best Hard Rock/Metal Performance for the song "Blood In My Eyes."