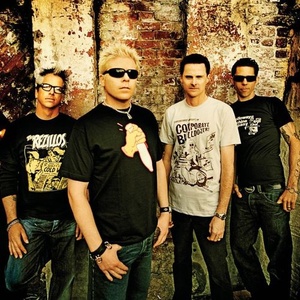 Upcoming events: 23
Subscribers:  77
My Rock Shows — search for concerts and buy tickets in more than 50 countries.
Join us
Sign in
Follow us on social media

Here you can find all upcoming The Offspring concerts. If the concert schedule is not right, please contact us and we will add a gig of The Offspring in 2022 or 2023 in our database.

The Offspring is an American rock band from Garden Grove, California, formed in 1984. Originally formed under the name Manic Subsidal, the band has consisted of lead vocalist and rhythm guitarist Dexter Holland, bassist Greg K., lead guitarist Kevin "Noodles" Wasserman and drummer Pete Parada since 2007. While Holland, Greg K., and Noodles have been constant members since the band was formed, the Offspring has gone through a number of drummers. Their longest-serving drummer was Ron Welty, who had been a member of The Offspring for 16 years; he was replaced by Atom Willard in 2003, and then four years later by Parada. The band is often credited—alongside fellow California punk bands Green Day, Bad Religion, NOFX, Pennywise and Rancid—for reviving mainstream interest in punk rock in the 1990s. They have sold over 40 million records worldwide, being considered one of the best-selling punk rock bands of all time.
The Offspring has released nine studio albums. Their first three albums for the independent record labels Nemesis and Epitaph earned them a cult following. The band's third studio album, Smash (1994), became their first commercial success, and has sold over eleven million copies worldwide, setting a record for most albums sold on an independent label and becoming the first album on Epitaph to obtain gold and platinum status. After signing to Columbia Records in 1996, the Offspring continued their commercial success with its next four studio albums — Ixnay on the Hombre (1997), Americana (1998), Conspiracy of One (2000) and Splinter (2003) — reaching platinum, multi-platinum, platinum and gold status respectively. Splinter was followed five years later by Rise and Fall, Rage and Grace (2008), and then four years later by Days Go By (2012). The Offspring is currently in production of their tenth studio album, due for release in 2018.

Punk Rock Ska Punk
They are subscribed to this band