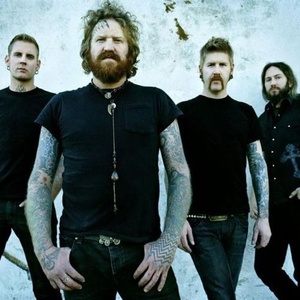 Upcoming events: 41
Subscribers:  10
My Rock Shows — search for concerts and buy tickets in more than 50 countries.
Join us
Sign in
Follow us on social media

Here you can find all upcoming Mastodon concerts. If the concert schedule is not right, please contact us and we will add a gig of Mastodon in 2022 or 2023 in our database.

Click the "Subscribe" button and get notified by MyRockShows about Mastodon upcoming events. Explore this page to find details of upcoming events of Mastodon, including the venue address and tickets cost.

Mastodon is an American heavy metal band from Atlanta, Georgia. Formed in 2000, the group is composed of bassist Troy Sanders, guitarists Brent Hinds and Bill Kelliher, and drummer Brann Dailor, all of whom perform vocals in studio (except Bill Kelliher). They all perform vocals at live shows. Their musical style features progressive concepts and unique instrumentation. Mastodon has released seven studio albums, as well as a number of other records. The band's debut album, Remission, released in 2002, garnered significant critical acclaim for its unique sound. Mastodon's second full-length release, Leviathan, is a concept album based on the novel Moby-Dick by Herman Melville. Three magazines awarded the record Album of the Year in 2004: Revolver, Kerrang! and Terrorizer.
The song "Colony of Birchmen" from the band's 2006 third album, Blood Mountain, was nominated for a Grammy Award for Best Metal Performance in 2007. Blood Mountain was followed in 2009 by Crack the Skye, and in 2011 by The Hunter, which achieved major commercial success in the United States, debuting at No. 10 on the Billboard 200 chart. The Hunter features the song "Curl of the Burl", which was nominated for a Grammy for Best Hard Rock/Metal Performance in 2012. Mastodon's 2014 album, Once More 'Round the Sun, peaked at No. 6 on the Billboard 200 chart and features the band's third Grammy-nominated song, "High Road". The band's seventh album Emperor of Sand was released on March 31, 2017, which features the band's most commercially successful song to date, "Show Yourself", peaking at number 4 on the US Billboard Mainstream Rock Songs chart in June 2017.

Avant-Garde Metal Doom Metal
They are subscribed to this band