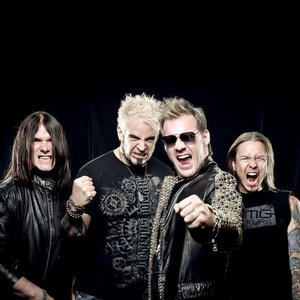 Upcoming events: 37
Subscribers:  1
My Rock Shows — search for concerts and buy tickets in more than 50 countries.
Join us

Here you can find all upcoming Fozzy concerts. If the concert schedule is not right, please contact us and we will add a gig of Fozzy in 2021 or 2022 in our database.

Click the "Subscribe" button and get notified by MyRockShows about Fozzy upcoming events. Explore this page to find details of upcoming events of Fozzy, including the venue address and tickets cost.

Please contact us in case you see a mistake in Fozzy events dates or if MyRockShows is leaving out any of Fozzy upcoming gigs.

Fozzy is an American heavy metal band formed in Atlanta, Georgia, in 1999 by lead singer Chris Jericho and guitarist Rich Ward. The band is currently signed to Century Media Records and has released two studio albums through this label. The band's current lineup consists of Chris Jericho, Rich Ward, Frank Fontsere, Billy Grey and Paul Di Leo. Jericho has characterized the band by saying, "If Metallica and Journey had a bastard child, it would be Fozzy." As of July 2014, the band has released six studio albums and one live album.
Their first two albums consist of original material and cover songs, while their third and fourth albums consist of all original material, and their fifth and sixth albums include covers of Black Sabbath's "Fairies Wear Boots" and ABBA's "SOS", respectively.