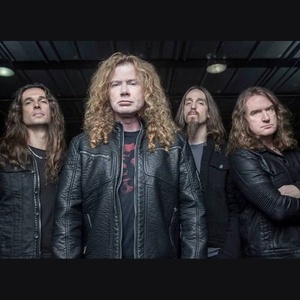 Upcoming concerts: 44
My Rock Shows — search for concerts and buy tickets in more than 50 countries.
Join us

Here you can find all upcoming Megadeth concerts. If the concert schedule is not right, please contact us and we will add a gig of Megadeth in 2021 or 2022 in our database.

Megadeth is an American heavy metal band from Los Angeles, California. Guitarist Dave Mustaine and bassist David Ellefson formed the band in 1983 shortly after Mustaine's dismissal from Metallica. A pioneer of the American thrash metal scene, the band is credited as one of the genre's "big four" with Anthrax, Metallica and Slayer, responsible for thrash metal's development and popularization. Megadeth plays in a technical style, featuring fast rhythm sections and complex arrangements. Themes of death, war, politics and religion are prominent in the song lyrics.
In 1985, the band released its debut album on the independent label Combat Records. The album's moderate commercial success caught the attention of bigger labels, which led to Megadeth signing with Capitol Records. Their first major-label album, Peace Sells... but Who's Buying?, was released in 1986 and influenced the underground metal scene. Despite its prominence in thrash metal, frequent disputes between its members and substance abuse issues brought Megadeth negative publicity during this period.
After the lineup stabilized, the band released a number of platinum-selling albums, including Rust in Peace (1990) and Countdown to Extinction (1992). These albums, along with touring worldwide, helped bring public recognition to Megadeth. The band temporarily disbanded in 2002 when Mustaine suffered an arm injury and re-established in 2004 without bassist Ellefson, who had taken legal action against Mustaine. Ellefson settled with Mustaine out of court and rejoined the group in 2010. Megadeth has hosted its own music festival, Gigantour, several times since mid-2005.
To date, Megadeth has sold about 25 million records worldwide, earned platinum certification in the United States for five of its fifteen studio albums, and received twelve Grammy nominations. Megadeth won its first Grammy Award in 2017 for the song "Dystopia" in the Best Metal Performance category. The band's mascot, Vic Rattlehead, regularly appears on album artwork and, since 2010, in live shows. The group has experienced controversy over its musical approach and lyrics, including canceled concerts and album bans. MTV has refused to play two of the band's videos that the network considered to condone suicide.

Thrash Metal
They track this band: