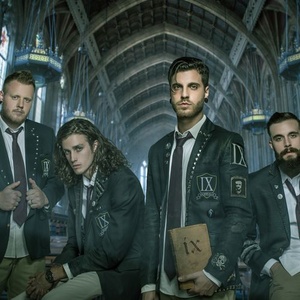 Upcoming events: 57
Subscribers:  31
My Rock Shows — search for concerts and buy tickets in more than 50 countries.
Join us
Sign in
Follow us on social media

Here you can find all upcoming Ice Nine Kills concerts. If the concert schedule is not right, please contact us and we will add a gig of Ice Nine Kills in 2022 or 2023 in our database.

Ice Nine Kills is an American metalcore band from Boston, Massachusetts who are signed to Fearless Records. Best known for its horror-inspired lyrics, Ice Nine Kills formed in its earliest incarnation in 2006 by high school friends Spencer Charnas and Jeremy Schwartz. The group originally pursued a style combining pop punk, emo, post-hardcore and ska into their own innovative blend of rock, but have since shifted into more of a theatrical metalcore hybrid. Charnas is currently the only remaining founding member.
To date, Ice Nine Kills has released three EPs: The Burning, 2 Song Acoustic and The Predator. Four full-length studio albums: Last Chance to Make Amends, Safe Is Just a Shadow, The Predator Becomes the Prey, and their most successful album to date Every Trick in the Book which peaked at #122 on the US Billboard 200. Their band name is derived from the fictional substance ice-nine from the science fiction novel Cat's Cradle by Kurt Vonnegut.

Gothic Metal Industrial Metal
They are subscribed to this band