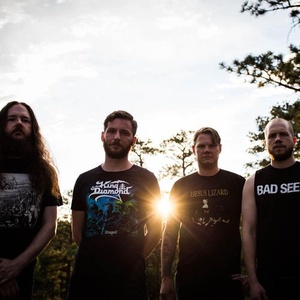 Upcoming events: 30
Subscribers:  1
My Rock Shows — search for concerts and buy tickets in more than 50 countries.
Join us
Sign in
Follow us on social media

Here you can find all upcoming Khemmis concerts. If the concert schedule is not right, please contact us and we will add a gig of Khemmis in 2022 or 2023 in our database.

Click the "Subscribe" button and get notified by MyRockShows about Khemmis upcoming events. Explore this page to find details of upcoming events of Khemmis, including the venue address and tickets cost.

Khemmis is an American doom metal band from Denver, Colorado formed in 2012. Their second studio album, Hunted, was ranked 11th on Rolling Stone's 20 best metal albums of 2016 and 1st on Decibel Magazine's Top 40 Albums of 2016. In July 2017, the band announced that they had signed to Nuclear Blast (via licensing deal with 20 Buck Spin) for the release of their third album. The band toured North America alongside Enslaved, Wolves in the Throne Room, and Myrkur as part of the 2018 Decibel Magazine Tour. They released their third album, Desolation, on June 22, 2018. The album was ranked 9th on Decibel Magazine’s Top 40 Albums of 2018 and 12th on Consequence of Sound’s Top 25 Metal + Rock Albums of 2018. In February 2019, the band announced that they had signed a worldwide deal with Nuclear Blast. In August that year, the band contributed a cover of the folk song O Death (titled "A Conversation With Death") for the video game The Dark Pictures Anthology: Man of Medan.