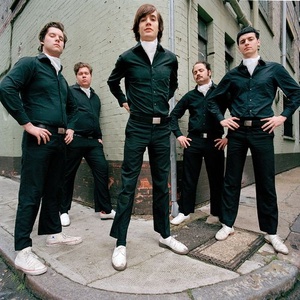 Upcoming concerts: 17
My Rock Shows — search for concerts and buy tickets in more than 50 countries.
Join us

Here you can find all upcoming The Hives concerts. If the concert schedule is not right, please contact us and we will add a gig of The Hives in 2021 or 2022 in our database.

The Hives are a Swedish rock band that rose to prominence in the early 2000s during the garage rock revival. Their mainstream success came with the release of the album Veni Vidi Vicious, containing the anthem "Hate to Say I Told You So". The band have been acclaimed by music critics as one of the best live rock bands in current music.
The Hives have released five studio albums: Barely Legal (1997), Veni Vidi Vicious (2000), Tyrannosaurus Hives (2004), The Black and White Album (2007) and Lex Hives (2012). They have one compilation album, Your New Favourite Band (2001) and they have issued a live DVD, Tussles in Brussels (2005).

Indie Rock
They track this band: