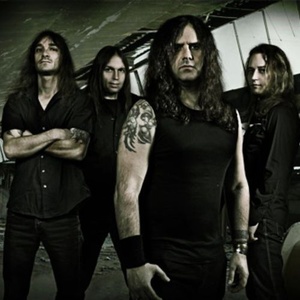 Upcoming events: 46
Subscribers:  26
My Rock Shows — search for concerts and buy tickets in more than 50 countries.
Join us
Sign in
Follow us on social media

Here you can find all upcoming Kreator concerts. If the concert schedule is not right, please contact us and we will add a gig of Kreator in 2022 or 2023 in our database.

Click the "Subscribe" button and get notified by MyRockShows about Kreator upcoming events. Explore this page to find details of upcoming events of Kreator, including the venue address and tickets cost.

Kreator is a German thrash metal band from Essen, formed in 1982. Their style of music is similar to that of their compatriots Destruction, Sodom and Tankard, which is usually more complex and, since 2001's Violent Revolution, more melodic. Along with those three bands, Kreator has been referred to as one of the "Big 4" of Teutonic thrash metal, and they are often credited with helping pioneer death metal and black metal by containing several elements of what was to become those genres. The band has achieved worldwide sales of over two million units for combined sales of all their albums, making them one of the best-selling German thrash metal bands of all time.
Kreator's style has changed several times over the years, from a Venom-inspired speed metal sound, later moving into thrash metal, and including a period of transitioning from thrash to industrial metal and gothic metal throughout the 1990s. In the early 2000s, Kreator returned to their classic thrash sound, which has continued to the present.
To date, Kreator has released fourteen studio albums, two EPs, two live albums and three compilation albums. They gained a large underground fanbase in the international thrash metal community, with their second studio album Pleasure to Kill (1986) regarded as an influential album of the genre. Kreator was also one of the first German thrash metal bands to sign to a major label (Epic Records in 1988); however, they would not have success until later albums, including their thirteenth studio album Phantom Antichrist (2012) and its follow-up Gods of Violence (2017), both of which peaked at higher chart positions in many countries, with the latter reaching number one on the German charts.

Thrash Metal Death Metal
They are subscribed to this band in