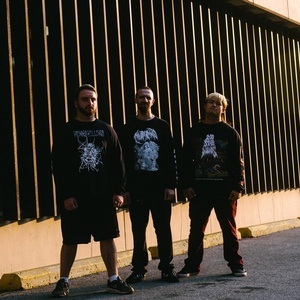 Upcoming events: 10
Subscribers:  0
My Rock Shows — search for concerts and buy tickets in more than 50 countries.
Join us
Sign in
Follow us on social media

Here you can find all upcoming Sanguisugabogg concerts. If the concert schedule is not right, please contact us and we will add a gig of Sanguisugabogg in 2022 or 2023 in our database.

A death metal band from Columbus, Ohio that formed in the year 2019. Sanguisugabogg currently consists of Devin Swank (vocals), Ced Davis (bass, guitars), Drew Arnold (bass) and Cody Davidson (drums). Past members include Steph Barnes (bass) and Cameron Boggs (guitars). They have an old school death metal sound. Their lyrical themes include gore, drugs, perversion and anti-authority. They were first signed to Maggot Stomp in 2019, but they are currently signed to Century Media Records. Through Maggot Stomp, they released their first demo Pornographic Seizures in 2019. In the year 2021, the band released four singles. Also in 2021, they released their debut full-length album Tortured Whole through their current label Century Media Records.

Of Feather And Bone