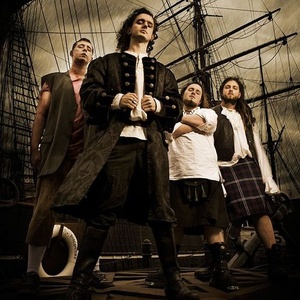 Upcoming concerts: 23
My Rock Shows — search for concerts and buy tickets in more than 50 countries.
Join us

Here you can find all upcoming Alestorm concerts. If the concert schedule is not right, please contact us and we will add a gig of Alestorm in 2021 or 2022 in our database.

Cieszanów Rock Festiwal 2021
Line-up: Alestorm, Batushka, Me And That Man
Wędrowiec, Cieszanów, Poland
Interested
0Going
Interested
Going 0
Not interested
We have no ticket information yet, subscribe to the event and we will notify you
No Information
I have a ticket:

Alestorm is a multi-national heavy metal band originally from Perth, Scotland. Their music is characterised by a pirate theme, and as a result they have been dubbed a "pirate metal" band by many critics and their fanbase.
After signing to Napalm Records in 2007, their debut album Captain Morgan's Revenge, was released on January 25, 2008. Black Sails at Midnight, the band's second album, was released on May 27, 2009. The band's third album, Back Through Time, was released on June 3, 2011. The fourth album from the band, Sunset on the Golden Age, was released in August 2014. Their fifth and latest album No Grave But the Sea was released on May 26, 2017.