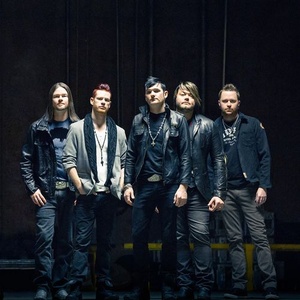 Here you can find all upcoming Hinder concerts. If the concert schedule is not right, please contact us and we will add a gig of Hinder in 2021 or 2022 in our database.

Hinder is an American rock band from Oklahoma that was formed in 2001 by lead singer Austin Winkler, lead guitarist Joe "Blower" Garvey, and drummer Cody Hanson. The band released four studio albums with Winkler; Extreme Behavior (2005), Take It to the Limit (2008), All American Nightmare (2010) and Welcome to the Freakshow (2012). Winkler left the band in 2013, and When The Smoke Clears (2015) was Hinder's first album featuring new lead vocalist Marshal Dutton.
The band was inducted into the Oklahoma Music Hall of Fame in 2007. The band is best known for their hit "Lips of an Angel".
The band's latest release, their sixth full length studio album titled The Reign was released August 11, 2017.