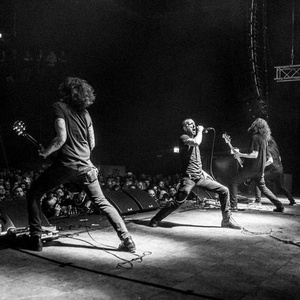 Upcoming events: 29
Subscribers:  3
My Rock Shows — search for concerts and buy tickets in more than 50 countries.
Join us

Here you can find all upcoming AmenRa concerts. If the concert schedule is not right, please contact us and we will add a gig of AmenRa in 2021 or 2022 in our database.

Amenra is a Belgian band from Kortrijk. It was formed in 1999 by vocalist Colin H. van Eeckhout and guitarist Mathieu Vandekerckhove, who now perform alongside drummer Bjorn Lebon, guitarist Lennart Bossu and bassist Levy Seynaeve. Among a number of other works, they have released five studio albums in the Mass series, the latest of them through Neurot Recordings. Their unique musical style, characterised by brooding atmospheres and spiritual intensity, is rooted in doom metal, hardcore punk and post-rock. In 2005, Amenra formed Church of Ra, a collective of collaborating artists which now includes Oathbreaker and the Black Heart Rebellion.

Year of No Light