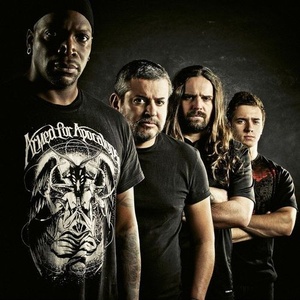 Upcoming events near: 42
Subscribers:  35
My Rock Shows — search for concerts and buy tickets in more than 50 countries.
Join us
Sign in
Follow us on social media

Here you can find all upcoming Sepultura concerts. If the concert schedule is not right, please contact us and we will add a gig of Sepultura in 2022 or 2023 in our database.

Click the "Subscribe" button and get notified by MyRockShows about Sepultura upcoming events. Explore this page to find details of upcoming events of Sepultura, including the venue address and tickets cost.

Sepultura (Portuguese pronunciation: [se.puw.ˈtu.ɾɐ], "grave") is a Brazilian heavy metal band from Belo Horizonte. Formed in 1984 by brothers Max and Igor Cavalera, the band was a major force in the thrash metal and groove metal genres during the late 1980s and early 1990s, with their later experiments drawing influence from alternative metal, world music, nu metal, hardcore punk and industrial metal.
Sepultura has had several changes in its lineup since its formation, with Max and Igor Cavalera departing in 1996 and 2006, respectively. Sepultura's current lineup consists of vocalist Derrick Green, guitarist Andreas Kisser, bassist Paulo Jr. and drummer Eloy Casagrande. Since Igor Cavalera's departure in 2006, there have been no original members left in the band. Paulo Jr., who has been a member of Sepultura since 1985, is the only member to appear on every release. Kisser, who replaced Jairo Guedz in 1987, has played on all of the band's studio albums, except for their debut Morbid Visions (1986) and the split Bestial Devastation (1985).
Sepultura has released fourteen studio albums to date, the latest being Machine Messiah (2017). Their most successful records are Arise (1991), Chaos A.D. (1993) and Roots (1996). Sepultura has sold over three million units in the United States and almost 20 million worldwide, gaining multiple gold and records around the globe, including in countries as diverse as France, Australia, Indonesia, United States, Cyprus and their native Brazil.

Groove Metal Nu Metal
They are subscribed to this band in