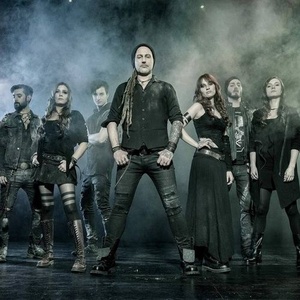 Upcoming events: 29
Subscribers:  28
My Rock Shows — search for concerts and buy tickets in more than 50 countries.
Join us
Sign in
Follow us on social media

Here you can find all upcoming Eluveitie concerts. If the concert schedule is not right, please contact us and we will add a gig of Eluveitie in 2022 or 2023 in our database.

Click the "Subscribe" button and get notified by MyRockShows about Eluveitie upcoming events. Explore this page to find details of upcoming events of Eluveitie, including the venue address and tickets cost.

Eluveitie (/ɛlˈveɪti/ el-VAY-ti) is a Swiss folk metal band from Winterthur, Zurich, founded in 2002 by Chrigel Glanzmann. The project's first EP, Vên, was released in 2003. Vên was a studio project of Glanzmann's, but its success led to the recruitment of a full band. The band then released a full-length album, Spirit, in June 2006. In November 2007, Eluveitie was signed by Nuclear Blast. The group rose to fame following the release of their first major-label album, Slania, in February 2008. The album peaked at number 35 in the Swiss charts and number 72 in the German charts.
Eluveitie describe themselves as "The new wave of folk metal". The band's style incorporates characteristics of melodic death metal combined with the melodies of traditional Celtic music. They use traditional European instruments, including the hurdy-gurdy and bagpipes, amidst guitars and both clean and harsh vocals. Their lyrics include references to Celtic mythology, particularly the Celtic Gaul village. The lyrics are often in the extinct ancient language Gaulish. The name of the band comes from graffiti on a vessel from Mantua (ca. 300 BC). The inscription in Etruscan letters reads eluveitie, which has been interpreted as the Etruscan form of the Celtic (h)elvetios (“the Helvetian”), presumably referring to a man of Helvetian descent living in Mantua.

Melodic Death Metal
They are subscribed to this band in