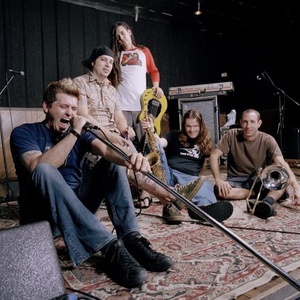 Upcoming events: 32
Subscribers:  8
My Rock Shows — search for concerts and buy tickets in more than 50 countries.
Join us
Sign in
Follow us on social media

Here you can find all upcoming Less Than Jake concerts. If the concert schedule is not right, please contact us and we will add a gig of Less Than Jake in 2022 or 2023 in our database.

About Less Than Jake

Less Than Jake is an American ska punk band from Port Charlotte, Florida, formed in 1992. The band consists of Chris DeMakes (vocals, guitar), Roger Lima (vocals, bass), Vinnie Fiorello (drums, lyrics), Buddy Schaub (trombone) and Peter "JR" Wasilewski (saxophone).
The group released its debut album, Pezcore, in 1995, following a series of independent seven-inch single releases. The band's subsequent two studio albums, Losing Streak (1996) and Hello Rockview (1998), were released on major label, Capitol Records, leading to increased exposure. The band's fifth studio album Anthem (2003) was the group's most commercially successful to date, featuring the singles, "She's Gonna Break Soon" and "The Science of Selling Yourself Short".
In 2008 the band founded its own label, Sleep It Off Records, and released its seventh full-length album, GNV FLA. The band has recently stated its preference for EP releases, and independently issued Greetings from Less Than Jake (2011) and its counterpart, Seasons Greetings from Less Than Jake (2012). In late 2012, the band combined the two to create the compilation album, Greetings and Salutations (2012) The band's eighth studio album, See the Light, was released on November 12, 2013.
The band entered the studio in 2016 to record their latest EP, titled "Sound The Alarm", which was released in February 2017 through Pure Noise Records.

Hardcore Punk Melodic Hardcore
They are subscribed to this band