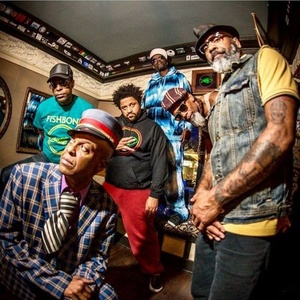 Upcoming events: 3
Subscribers:  6
My Rock Shows — search for concerts and buy tickets in more than 50 countries.
Join us
Sign in
Follow us on social media

Here you can find all upcoming Fishbone concerts. If the concert schedule is not right, please contact us and we will add a gig of Fishbone in 2022 or 2023 in our database.

Click the "Subscribe" button and get notified by MyRockShows about Fishbone upcoming events. Explore this page to find details of upcoming events of Fishbone, including the venue address and tickets cost.

Fishbone is an American rock band formed in 1979 in Los Angeles, California, which plays a fusion of ska, punk rock, funk, heavy rock and soul. Critics have noted of the band: "Fishbone was one of the most distinctive and eclectic alternative rock bands of the late '80s. With their hyperactive, self-conscious diversity, goofy sense of humor, and sharp social commentary, the group gained a sizable cult following during the late '80s, yet they were never able to earn a mainstream audience."
Fishbone first assembled in 1979 with John Norwood Fisher (bass); his brother Philip "Fish" Fisher (drums); Angelo Moore, who sometimes uses the stage name "Dr. Madd Vibe" (vocals, saxophones ranging from sopranino to bass, theremin); Kendall Jones (guitar); "Dirty" Walter A. Kibby II (vocals, trumpet); and Christopher Dowd, who sometimes uses the pseudonym "Charlie Down" (keyboards, trombone, vocals). Founding members John Norwood Fisher, Angelo Moore, and Walter Kibby remain with the band as of 2016; most recently, Philip "Fish" Fisher and John Bigham rejoined the band.

Ska Punk
They are subscribed to this band