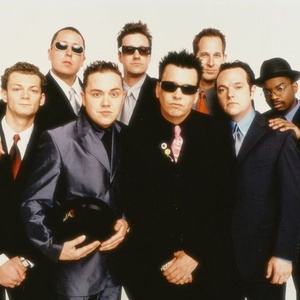 Click Subscribe to track The Mighty Mighty Bosstones on My Rock Shows. We'll notify you about new dates!

About The Mighty Mighty Bosstones

The Mighty Mighty Bosstones (stylized as The Mighty Mighty BossToneS; informally referred to as The Bosstones) are an American ska punk band from Boston, Massachusetts, formed in 1983. Since the band's inception, lead vocalist Dicky Barrett, bassist Joe Gittleman, tenor saxophonist Tim "Johnny Vegas" Burton and dancer ("Bosstone") Ben Carr have remained constant members. The line-up also includes drummer Joe Sirois, saxophonist Leon Silva, guitarist Lawrence Katz and trombonist Chris Rhodes.
The Bosstones are often credited as one of the progenitors of the genre of ska punk and the creators of its subgenre ska-core a form of music which mixes elements of ska with punk rock and hardcore. Since the release of their 1989 debut Devil's Night Out, the band toured and recorded extensively throughout the 1990s, becoming a key figure in the development of the American third wave ska scene and one of the first bands to popularize the genre in the musical mainstream, reaching their commercial peak with their platinum-selling 1997 album Let's Face It and its hit single "The Impression That I Get". The band had released seven studio albums, three EPs and a live album by the time they announced a hiatus in December 2003. In 2007, the Bosstones reunited to resume recording and touring. From 1994-2002, and since 2007, they have hosted the annual Hometown Throwdown music festival.