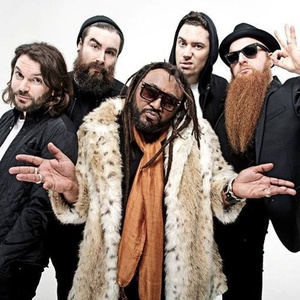 Upcoming concerts: 30
My Rock Shows — search for concerts and buy tickets in more than 50 countries.
Join us

Here you can find all upcoming Skindred concerts. If the concert schedule is not right, please contact us and we will add a gig of Skindred in 2021 or 2022 in our database.

Skindred are a Welsh metal band formed in Newport in 1998. Their musical style mixes heavy metal, alternative rock, and reggae. The band also integrate elements of hardcore punk, dancehall, jungle, ska, hip hop, drum and bass, dubstep, and various other influences into their music. They are well known for their energetic and involving live performances, and have won several awards including "Best Live Band" at the 2011 UK Metal Hammer Golden Gods Awards and the "Devotion Award" at the 2011 Kerrang! Awards.