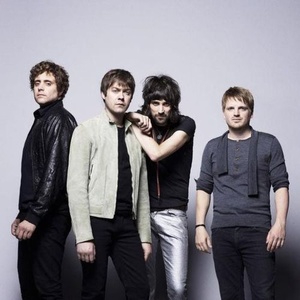 Upcoming events: 19
Subscribers:  28
My Rock Shows — search for concerts and buy tickets in more than 50 countries.
Join us
Sign in
Follow us on social media

Here you can find all upcoming Kasabian concerts. If the concert schedule is not right, please contact us and we will add a gig of Kasabian in 2022 or 2023 in our database.

Click the "Subscribe" button and get notified by MyRockShows about Kasabian upcoming events. Explore this page to find details of upcoming events of Kasabian, including the venue address and tickets cost.

Kasabian (/kəˈseɪbiən/ kə-SAY-bee-ən) are an English rock band formed in Leicester in 1997. The band's original members consisted of vocalist Tom Meighan, guitarist and vocalist Sergio Pizzorno, guitarist Chris Karloff, and bassist Chris Edwards. The band's line-up was completed by drummer Ian Matthews in 2004 after a string of session drummers. Karloff left the band in 2006 and founded a new band called Black Onassis. Jay Mehler joined as touring lead guitarist in 2006. Mehler left the band for Liam Gallagher's Beady Eye in 2013, to be replaced by Tim Carter. In 2010 and 2014, Kasabian won the Q Awards for 'Best Act in the World Today', while they were also named "Best Live Act" at the 2014 Q Awards and the 2007 NME Awards. The band's music is often described as "indie rock", but Pizzorno has said he "hates indie bands" and does not feel Kasabian fit into that category.
Kasabian have released six studio albums – Kasabian (2004), Empire (2006), West Ryder Pauper Lunatic Asylum (2009), Velociraptor! (2011), 48:13 (2014), and For Crying Out Loud (2017). The band's music has been described as a mix between The Stone Roses and Primal Scream with the swagger of Oasis. Their music has won them several awards and recognition in the media, including a Brit Award in 2010 for Best British Group, and their live performances have received praise, the most notable of which was their appearance as headliners at the 2014 Glastonbury Festival.

Britpop Indie Rock
They are subscribed to this band