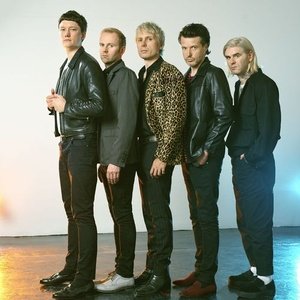 Upcoming events: 20
Subscribers:  25
My Rock Shows — search for concerts and buy tickets in more than 50 countries.
Join us
Sign in
Follow us on social media

Here you can find all upcoming Franz Ferdinand concerts. If the concert schedule is not right, please contact us and we will add a gig of Franz Ferdinand in 2022 or 2023 in our database.

Franz Ferdinand are a Scottish rock band, formed in 2002 and based in Glasgow. The band's original lineup was composed of Alex Kapranos (lead vocals and guitar, keyboard), Nick McCarthy (rhythm guitar, keyboards and backing vocals), Bob Hardy (bass guitar), and Paul Thomson (drums, percussion and backing vocals). Dino Bardot (guitar) and Julian Corrie (guitar, keyboards and synthesiser) are also currently members of the band. The band has been known for being one of the most popular post-punk revival bands, garnering multiple UK top 20 hits and selling over 3 million albums worldwide, as reported during late 2009. They have been nominated for several Grammy Awards and have received two Brit Awards—winning one for Best British Group, as well as one NME Award.
The band began by releasing their debut extended play, Darts of Pleasure, in 2003, under Domino Records. The band gained recognition in the United Kingdom after the EP's title track peaked at number 44 on UK Singles Chart. In January 2004, the band released the song "Take Me Out". The song went on to achieve global recognition, charting in several countries, and earned a Grammy nomination for Best Rock Performance by a Duo or Group with Vocal. It has since been noted as the band's signature song and has received critical acclaim. The band subsequently released their eponymous debut studio album on 9 February 2004 to critical acclaim. The album won the 2004 Mercury Prize and earned a Grammy nomination for Best Alternative Album.

Garage Rock Indie Rock
They are subscribed to this band in