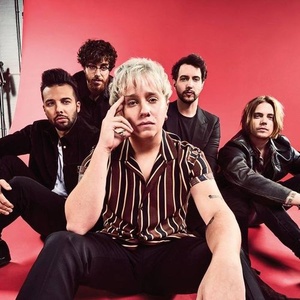 Upcoming concerts: 45
My Rock Shows — search for concerts and buy tickets in more than 50 countries.
Join us

Click Subscribe to track Nothing But Thieves on My Rock Shows. We'll notify you about new dates!

About Nothing But Thieves

Nothing but Thieves are an English alternative rock band formed in 2012 in Southend-on-Sea, Essex. They consist of lead vocalist and guitarist Conor Mason, guitarist Joe Langridge-Brown, guitarist and keyboardist Dominic Craik, bassist Philip Blake, and drummer James Price. In 2014, they signed to RCA Records. Their style of music has been compared to the likes of Foals, The Neighbourhood, and Civil Twilight, and they have been played on alternative, modern rock and active rock radio.