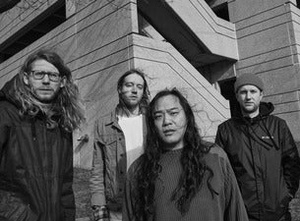 Concert of La Dispute in The Glass House

TO SCRATCHED OUT, FOR EVERYTHING
Didn’t spend much time looking ahead in the first five or so years of this band. Easier then to stay fixed to the moment, looking forward only at the end of each night to the one up next, the next town on the tour routing, the next tank of gas to get there. Almost impossible not to.
Didn’t anticipate spending much time looking back either, even as one ten year anniversary came and another one approached. But then the whole world shut down, and in its newly suspended animation we took the longest break we ever have from playing live, from writing music together, from being in the same town, so all we had was time to reflect on the past—on what makes this important to us.
And what it made us do for the first time is look forward, to being back together in the same room, on the same stage, to the next night on tour, to celebrating milestones with the people who got us to them: each other, our extended family of friends, and you. And to making new ones—friends and milestones—in the process.
Cheers to you for 10+ years of Wildlife, and for everything else.
ld