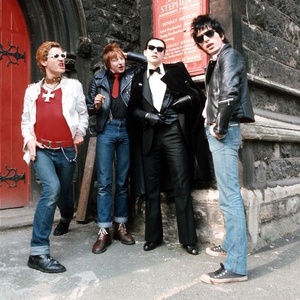 Upcoming events: 5
Subscribers:  8
My Rock Shows — search for concerts and buy tickets in more than 50 countries.
Join us
Sign in
Follow us on social media

Here you can find all upcoming The Damned concerts. If the concert schedule is not right, please contact us and we will add a gig of The Damned in 2022 or 2023 in our database.

Click the "Subscribe" button and get notified by MyRockShows about The Damned upcoming events. Explore this page to find details of upcoming events of The Damned, including the venue address and tickets cost.

The Damned are an English rock band formed in London in 1976 by lead vocalist Dave Vanian, guitarist Brian James, bassist (and later guitarist) Captain Sensible, and drummer Rat Scabies. They were the first punk rock band from the United Kingdom to release a single, "New Rose" (1976), release an album, Damned Damned Damned (1977), and tour the United States. They have nine singles that charted on the UK Singles Chart Top 40.
The band briefly broke up after Music for Pleasure (1977), the follow-up to their debut album, was critically dismissed. They quickly reformed without Brian James, and released Machine Gun Etiquette (1979). In the 1980s they released four studio albums, The Black Album (1980), Strawberries (1982), Phantasmagoria (1985), and Anything (1986). The latter two albums did not feature Captain Sensible, who had left the band in 1984. In 1988, James and Sensible rejoined to play what was said to be the Damned's final live show. This was released the next year as the live album Final Damnation.
The Damned again reformed for a tour in 1991. In 1995, they released a new album, Not of This Earth, which was Scabies's last with the band. This was followed by Grave Disorder (2001), and their most recent album, So, Who's Paranoid? (2008).
Despite going through numerous lineup changes, the formation of Vanian, Sensible, keyboardist Monty Oxymoron, drummer Pinch and bassist Stu West had been together from 2004 until Stu West left the band in 2017 and Paul Gray rejoined, having been part of the band in the 1980s.
The band is well known for being one of the first gothic rock bands and a major influence on the goth subculture with lead singer Dave Vanian's vampire themed costume and dark lyrics being major influences.
The Damned influenced future hardcore punk bands with their fast-paced, energetic playing style and attitude. Along with the Sex Pistols and the Clash, they helped to spearhead the punk movement in the United Kingdom. They are sometimes referred to as British punk's "band of firsts," having made accomplishments mentioned previously, as well as other "firsts" like the first punk band to break up and come back.

Punk Rock
They are subscribed to this band in