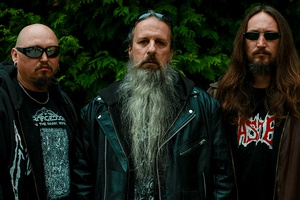 You have a great opportunity to see Master, on March 24, 2022 at Sala Bóveda in Barcelona.

Master is an American death metal band led by Paul Speckmann. The band was originally formed in Chicago, but later relocated to the Czech Republic.
The band was originally formed in 1983 as Death Strike, after the demise of the band War Cry. The band's sound was influenced by Venom, Slayer and Motörhead. In 1985, Speckmann renamed the band Master, and obtained a record deal with Combat Records. An album was recorded, but was shelved due to issues with the label. The recording sessions for the album were released in 2003 by Displeased Records as Unreleased 1985 album. In 1990, the band signed with the German label Nuclear Blast. The label also had Speckmann's other band, Abomination, under contract. Master released their debut album, titled Master, in 1990. The album was recorded with Mittelbrun on guitars and Schmidt on drums. Nuclear Blast did not approve of the album; it was later re-recorded with Nickeas (drums) and Martinelli (guitar), and eventually released as the Speckmann Project in 1991.

Master released On the Seventh Day God Created... Master in 1991, which featured Paul Masvidal on lead guitar. Collection of Souls was released in 1993, but Master did not re-sign with Nuclear Blast. Master went on hiatus, in search of a new record label. Master released Faith Is in Season in 1998 through Pavement Music. Speckmann focused on several other projects, including the resurrected Abomination. Speckmann eventually joined Czech band Krabathor, and subsequently relocated to the Czech Republic.[2]

Master released Let's Start a War in 2002 on System Shock. After releasing Spirit of the West in 2004, Master signed with German label Twilight Vertrieb, and released Four More Years of Terror in 2005. Slaves to Society was released in May 2007, and the band embarked on a European tour in May and June 2007.