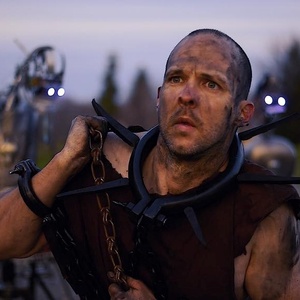 Concert of Captured! By Robots in Hi-Dive

Captured! By Robots! Funeral for the Human Race Tour (https://capturedbyrobots.com)
With AXESLASHER (axeslasher.com) and VALIOMIERDA

About Captured! By Robots

Captured! by Robots is a touring group with only one human member. It is part-concert and part-performance act, made up of two robots and their human, "JBOT".

The fictional C!BR backstory claims that the human, in an attempt to make his own band, created the robots. Instead of following him, they revolted, pulled out his intestines and eyes, and now force him to travel the world with them, performing music and making him contemplate the inferiority of the human race.

The human, JBOT, is portrayed by actor/musician Jay Vance, a former bassist for ska bands Blue Meanies and Skankin' Pickle. He most notable for having played on the Blue Meanies' album "Kiss Your Ass Goodbye."