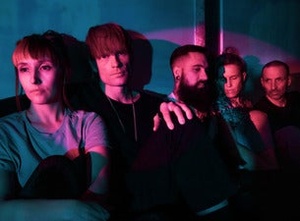 Concert of Mother Mother in The Masonic

Based on the latest local guidelines, attendees are no longer required to provide proof of negative COVID-19 test AND/OR vaccination for entry into this event. We encourage the use of masks. Be sure to check your venue website for the latest updates and guidelines as entry requirements are subject to change.

Mother Mother is a Canadian indie rock band based in Quadra Island, British Columbia. The band consists of Ryan Guldemond on guitar and vocals, Molly Guldemond and Jasmin Parkin on vocals and keyboard, Ali Siadat on drums, and Mike Young on bass. Longtime bassist Jeremy Page left the band in 2016.

In 2005, they independently released their self-titled debut album under the band name Mother. They later changed their name to Mother Mother, and re-released the album on Last Gang Records in 2007. Retitled Touch Up, the reissue also featured several new songs.

Their seventh album, Dance and Cry, was released November 2, 2018. In late 2020, the band's music went viral on TikTok, causing a surge in streams. Their eighth studio album, Inside, was released on June 25, 2021 on Warner Brothers Music. On January 28, 2022, the band released a deluxe version of Inside, containing 7 new songs.