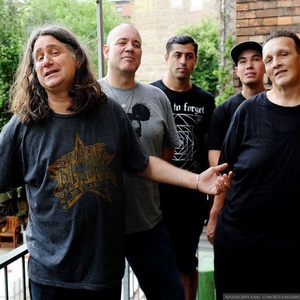 Concert of Adolescents in Ogden Theatre

The Adolescents is an American punk rock band formed in Fullerton, California in 1980. Part of the hardcore punk movement in southern California in the early 1980s, they were one of the main punk acts to emerge from Orange County, along with their peers in Agent Orange and Social Distortion. Founding bassist Steve Soto has been the sole constant member of the band since its inception, with singer Tony Reflex being in the group for all but one album.
During the 1980s the band went through several lineup changes, breakups, and reunions, most involving drummer Casey Royer and guitarist brothers Rikk, Frank, and Alfie Agnew. During that decade, they released three albums: Adolescents (1981), Brats in Battalions (1987), and Balboa Fun*Zone (1988, without Reflex), then broke up in April 1989. Most of the members remained active in other musical projects, and a reunion of most of the early members in 2001 resulted in the comeback album OC Confidential (2005). Soto and Reflex have been the band's only constant members and primary songwriters since then, anchoring lineups which have released four more studio albums: The Fastest Kid Alive (2011), Presumed Insolent (2013), La Vendetta... (2014), and Manifest Density (2016).