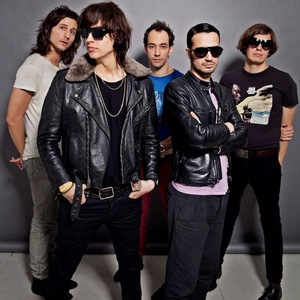 Upcoming events: 32
Subscribers:  12
My Rock Shows — search for concerts and buy tickets in more than 50 countries.
Join us
Sign in

Here you can find all upcoming The Strokes concerts. If the concert schedule is not right, please contact us and we will add a gig of The Strokes in 2022 or 2023 in our database.

Click the "Subscribe" button and get notified by MyRockShows about The Strokes upcoming events. Explore this page to find details of upcoming events of The Strokes, including the venue address and tickets cost.

The Strokes are an American rock band from New York City. Formed in 1998, the band is composed of singer Julian Casablancas, guitarists Nick Valensi and Albert Hammond Jr., bassist Nikolai Fraiture, and drummer Fabrizio Moretti. Following the conclusion of five-album deals with RCA and Rough Trade, the band has continued to release new music through Casablancas' Cult Records.