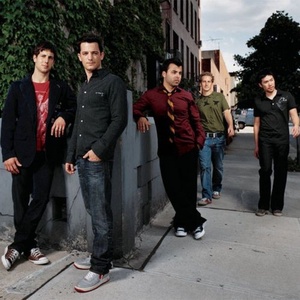 Upcoming events near: 18
Subscribers:  3
My Rock Shows — search for concerts and buy tickets in more than 50 countries.
Join us
Sign in
Follow us on social media

Here you can find all upcoming O.A.R. concerts. If the concert schedule is not right, please contact us and we will add a gig of O.A.R. in 2022 or 2023 in our database.

Click the "Subscribe" button and get notified by MyRockShows about O.A.R. upcoming events. Explore this page to find details of upcoming events of O.A.R., including the venue address and tickets cost.

O.A.R. (short for Of a Revolution) is an American reggae, jam band founded in 1996 in Rockville, Maryland. The band consists of lead vocalist/guitarist Marc Roberge, drummer Chris Culos, guitarist Richard On, bassist Benj Gershman and saxophonist/guitarist Jerry DePizzo. Together, the band has released eight studio albums, including their latest release, The Rockville LP, in June 2014. The band is well known for their live shows and extensive summer touring, and have released five records of various live performances to date. Four of the band members grew up in Rockville, Maryland and attended Thomas Sprigg Wootton High School. After graduating, they went on to study at The Ohio State University where they met the fifth member, saxophonist/guitarist Jerry DePizzo from Youngstown, Ohio.

Alternative Rock Post-Grunge
They are subscribed to this band in