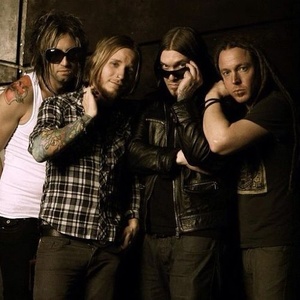 Upcoming events: 32
Subscribers:  13
My Rock Shows — search for concerts and buy tickets in more than 50 countries.
Join us

Here you can find all upcoming Shinedown concerts. If the concert schedule is not right, please contact us and we will add a gig of Shinedown in 2021 or 2022 in our database.

Click the "Subscribe" button and get notified by MyRockShows about Shinedown upcoming events. Explore this page to find details of upcoming events of Shinedown, including the venue address and tickets cost.

Please contact us in case you see a mistake in Shinedown events dates or if MyRockShows is leaving out any of Shinedown upcoming gigs.

Shinedown is an American rock band from Jacksonville, Florida. Formed by Brent Smith in 2001 after the dissolution of his prior band, Smith, still under contract with record label Atlantic Records, recruited the band's original lineup of Jasin Todd as guitarist, Brad Stewart on bass, and Barry Kerch on drums. Consistent for the first two album cycles, a few lineup changes followed in the late 2000s, eventually stabilizing with Smith and Kerch, as remaining members alongside newcomers Zach Myers on guitar, and Eric Bass on bass. The group has released five studio albums: Leave a Whisper (2003), Us and Them (2005), The Sound of Madness (2008), Amaryllis (2012), and Threat to Survival (2015). Shinedown has sold more than ten million records worldwide, and has had 11 number one singles on the Billboard Mainstream Rock charts, the third most of all-time, behind Van Halen and Three Days Grace.