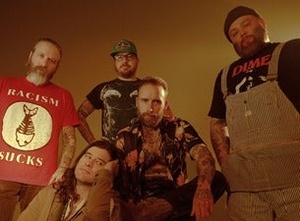 Alexisonfire (pronounced "Alexis on fire") is a five-piece Canadian post-hardcore band that formed in St. Catharines, Ontario in 2001. The band consists of George Pettit (unclean vocals), Dallas Green (clean vocals, guitar, piano), Wade MacNeil (guitar, backing vocals), Chris Steele (bass guitar), and Jordan Hastings (drums, percussion).
They describe their music as "the sound of two Catholic high-school girls in mid-knife-fight" (a reference to their song "A Dagger Through the Heart of St. Angeles", also the inspiration for their debut album cover art). When the band came out of the underground like an "utterly captivating car-accident-in-progress" in late 2001, it was enough to impress critics as well as earning their self-titled debut album a gold certification in Canada.
The band has released three subsequent successful studio albums since then: Watch Out! in 2004, Crisis in 2006, and Old Crows/Young Cardinals in 2009, each achieving platinum certification in their native country. Plus three special edition live albums from Manchester Academy, Birmingham Academy, and Brixton Academy. Their accolades include a 2005 Juno Award for New Group of the Year.
In August 2011, front man George posted a message to fans on the band's official website stating that, following the departure of two members, that they would issue several special releases and complete a farewell tour before parting ways.
On March 9, 2015 the band announced a reunion tour, their first since their farewell tour in 2012, including dates at Reading and Leeds festivals, Sonic Boom, Heavy Montréal, X-Fest and Riot Fest. On September 19, 2015, at Riot Fest in Toronto, the band announced their official reunion, although in a post on their official Facebook page afterwards, the band clarified that despite the fact they were "as good friends as they had ever been", there were "no immediate plans" for the future.
In June 2016, the band was announced to headline the UNIFY gathering 2017 in Australia and later announced a small tour across Australia and New Zealand with The Dirty Nil set to take place January 2017.

211 Stockwell Rd, Brixton, London SW9 9SL, United Kingdom
London, United Kingdom
See all rock & metal events in O2 Academy Brixton
You may also like
{"location":"City", "band":"Band name", "genre": "Genres", "place":"Place", "event":"Festivals in"}
{"message":"We use cookies to enhance your experience. By continuing to visit this site you agree to our use of cookies.","info":"More info", "link":"https://en.wikipedia.org/wiki/Cookie" }