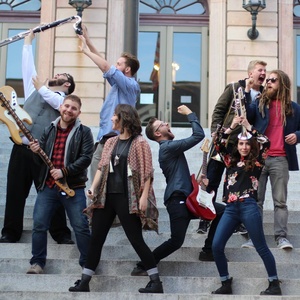 With an unusually large number of musicians comes an unusually large palette with which to paint. Big Fat Meanies strives to write music with an infinite palette, without boundaries or limitations. Their songs blur the lines between genres, and blend the different musical backgrounds of each member in perfect harmony. Their debut album The Time Has Come… reflects these qualities, and combines an eclectic mix of rock influenced sounds that collide into a monstrous nautical themed soundscape.

Big Fat Meanies have headlined various venues in their home city of Lancaster, Pennsylvania including The Chameleon Club, Tellus360, and Club XL in Harrisburg. BFM has also provided regional support for national touring acts such as Thank You Scientist, Bent Knee, and Stacked Like Pancakes.

To lend an ear to Big Fat Meanies for a night is to guarantee one thing: fun. Whether they were playing to a room of 10 people in their early days, or a room of 200 now, the band’s high energy and infectious stage presence never fails to get a crowd moving.