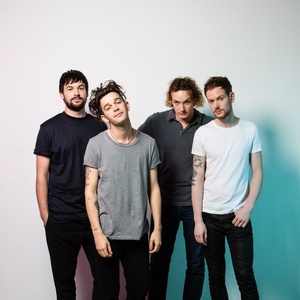 Upcoming events: 38
Subscribers:  2
My Rock Shows — search for concerts and buy tickets in more than 50 countries.
Join us
Sign in
Follow us on social media

Click the "Subscribe" button and get notified by MyRockShows about The 1975 upcoming events. Explore this page to find details of upcoming events of The 1975, including the venue address and tickets cost.

The band's origins are traced to their attendance at Wilmslow High School and playing together as teenagers. Gigs, organised by a council worker, led the band to sign with Dirty Hit and Polydor Records. The band opened for several major acts and released a series of extended plays (Facedown, Sex, Music for Cars, IV) throughout 2012 before releasing their UK chart-topping self-titled debut album (2013), which included the popular singles "Sex", "Chocolate", and "Robbers".

Their second album, I Like It When You Sleep, for You Are So Beautiful yet So Unaware of It (2016), reached No. 1 in the US, UK, Canada, Australia and New Zealand. Following the touring cycle for the record, the band announced their third album under the working title of Music for Cars, before going on hiatus again throughout 2017.

Returning in 2018, the band announced that the album had evolved into their third campaign cycle, consisting of their third and fourth studio albums. The first, A Brief Inquiry into Online Relationships (2018), was released to widespread critical acclaim,[8] and became their third No. 1 album in the UK. The second, Notes on a Conditional Form, was released in May 2020 and became their fourth consecutive No. 1 album in the UK.

The band's fifth studio album, Being Funny in a Foreign Language, became their fifth consecutive No. 1 album in the UK on its release on Friday 21st October 2022. The album's fifth track, Oh Caroline, debuted at No. 29 in the singles chart, with the singles I'm In Love With You at No. 34 and Happiness at No. 49. The album received widespread critical acclaim: Maura Johnston wrote in Rolling Stone that the band had "reassert[ed] themselves at the forefront of 2020s pop-rock."

The 1975 has garnered acclaim for their relevant lyricism and exploration of an eclectic range of genres such as pop rock, synth-pop, R&B, electropop, new wave forms of electronic music (such as UK garage, 2-step and ambient), and forms of rock music (such as shoegaze, post-punk and post-rock), as well as elements of jazz, soul and gospel.