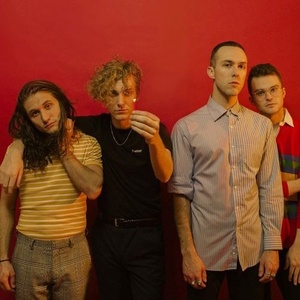 Upcoming events: 41
Subscribers:  2
My Rock Shows — search for concerts and buy tickets in more than 50 countries.
Join us

Here you can find all upcoming COIN concerts. If the concert schedule is not right, please contact us and we will add a gig of COIN in 2021 or 2022 in our database.

Click the "Subscribe" button and get notified by MyRockShows about COIN upcoming events. Explore this page to find details of upcoming events of COIN, including the venue address and tickets cost.

Coin (often stylized COIN) is an American indie pop band formed in 2012 at Nashville, Tennessee. It currently consists of Chase Lawrence (lead vocals, synthesizers), Ryan Winnen (drums), Joe Memmel (lead guitar, backing vocals) and Zachary Dyke (bass guitar).
The band originally released two extended plays in 2012 and 2013 titled Saturdays and 1992 respectively. They then gained mainstream attention in 2015 with the lead single, “Run", from their eponymous debut album, produced by Jay Joyce, released later the same year by Columbia.
The group gained further mainstream success in 2016 with the lead single, "Talk Too Much", from the band's second studio album, How Will You Know if You Never Try, which was released on April 21, 2017. The song has since become their first song to chart on Billboard's Alternative Songs chart.

Alternative Rock Grunge
They are subscribed to this band