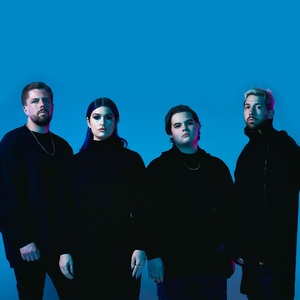 Underoath - Voyeurist Tour, plays at Jannus Live on March 27, 2022 with special guests Spiritbox, Bad Omens, Stray From The Path. All Ages. Doors open at 6:00pm, Show starts at 7:00pm. Rain or Shine. All support acts are subject to change without notice.

Spiritbox is a Canadian heavy metal band from Victoria, British Columbia. Husband and wife duo guitarist Mike Stringer and vocalist Courtney LaPlante established Spiritbox in 2017. The band's full lineup comprises LaPlante and Stringer, bassist Bill Crook, and drummer Zev Rose. The band's metal style is difficult to pigeonhole into a specific metal music genre and displays an array of styles that draw from a variety of influences and incorporate electronic elements.

Dissatisfaction caused LaPlante and Stringer to leave their former band, Iwrestledabearonce, and they started Spiritbox, seeking artistic freedom. Both released a debut extended play, Spiritbox (2017), followed by a second EP, Singles Collection (2019), with the band's line-up completed. Spiritbox developed an approach to fanbase building focused on the Internet and introduced their music through acclaimed music videos. The band continued to gain popularity with several singles that reached the Billboard charts before releasing their debut album Eternal Blue (2021), which entered the US Billboard 200 at number thirteen. Their music is currently released through their label, Pale Chord, via a partnership with Rise Records.