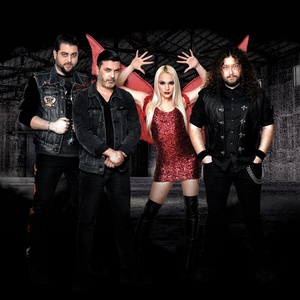 Concert of Scarlet Aura in The PUB

You have a great opportunity to see Scarlet Aura, on Nov. 6, 2021 at The PUB in Bucharest.

Are you ready to let your world become Scarlet? If you love metal music, powerful and seductive husky female vocals, hot and heavy riffs, thunder bass and drums on steroids? …then you definitely are!

Scarlet Aura, the eastern rising heavy metal star of the Eastern Europe is ready to welcome you into the family!

The Romanian band convinced worldwide promoters and fans with their bold music and messages, combination of classical heavy metal with the modern melodic sound and seductive, unique stage performances and sparkling appearance.

On 22nd of March 2019 the band released a new album via Silver City Records with the title: “Hot’n’Heavy”!
Scarlet Aura has been already promoting the album on a 26 shows headlining tour in China in November-December 2018 and in Europe in September 2018th as “Hot’n’Heavy Release Album Tour”.

“Hot’n’Heavy” is Scarlet Aura’s 4th highly-anticipated studio album, recording and production for which took place between January and May 2018, and heavily draws from symphonic and power metal to heavy metal and stays within unique sound and vision of Scarlet Aura. With the new album, the band brings a heavy sound, state-of-the-art production, and more dark and deeper lyrics about finding your true meaning and how to be yourself, how to dare to be different and have no fear as one never be alone through music, the right to fight for what you believe in and also for love, for friendship and music.