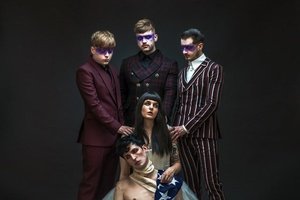 Concert of Creeper in O2 Ritz

All packages are NON-TRANSFERABLE; NO CUSTOMER NAME CHANGES will be permitted under any circumstances. You will receive an email from Warner Music Artist Services approximately 48-72hrs before the performance date with instructions regarding collecting your package. All programs & times may vary date-to-date and are subject to modification at any time for any reason however the package collection will take place prior to the advertised time of doors. The merch package does not gain or authorise access into the venue, VIP or any backstage areas. All merchandise to be collected from the venue on the night of the show. If you have questions regarding the package or have not received your instructions in the timeframe indicated, please contact Warner Music Artist Services by emailing vipinfouk@wmgcustomerservice.com

Creeper are an English horror punk band from Southampton, Hampshire. Formed in 2014, the group features lead vocalist Will Gould, guitarists Ian Miles and Oliver Burdett (who replaced Sina Nemati in 2015), keyboardist and second vocalist Hannah Greenwood, bassist Sean Scott and drummer Dan Bratton. Creeper released their self-titled debut extended play (EP) Creeper in 2014, which was followed by The Callous Heart and The Stranger on Roadrunner Records in 2015 and 2016, respectively. They released their debut full-length album Eternity, in Your Arms in 2017, which debuted at number 18 on the UK Albums Chart.
Formed through their mutual involvement in hardcore punk and post-hardcore groups in the Southampton area, Creeper are musically and stylistically influenced by fellow "goth punk" groups including AFI and Alkaline Trio, as well as more traditional punk rock acts like The Bouncing Souls and glam rock artists such as David Bowie. The band's songwriting is typically led by Gould and Miles, although Nemati also co-wrote many of their early songs. Creeper have been hailed by numerous critics as one of the best new rock bands since their formation, winning a Kerrang! Award and a Metal Hammer Golden Gods Award in 2016.

Whitworth St W, Manchester M1 5NQ, United Kingdom
Manchester, United Kingdom
See all rock & metal events in O2 Ritz
You may also like
{"location":"City", "band":"Band name", "genre": "Genres", "place":"Place", "event":"Festivals in"}
{"message":"We use cookies to enhance your experience. By continuing to visit this site you agree to our use of cookies.","info":"More info", "link":"https://en.wikipedia.org/wiki/Cookie" }