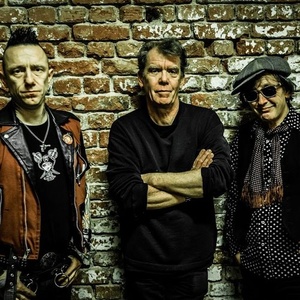 Concert The Vibrators in Lookout Lounge

A-13 Punk Rock & Black Heart Booking present...The Vibrators - With a career lasting thirty-three years, vocalist/guitarist IAN "KNOX" CARNOCHAN, bassist PAT COLLIER, guitarist JOHN ELLIS and drummer EDDIE originally formed the VIBRATORS in February 1976, and their first gig was supporting THE STRANGLERS at Hornsey Art College in North London. They supported THE SEX PISTOLS at the 100 CLUB and were one of the bands playing at the now legendary 100 CLUB PUNK ROCK FESTIVAL, where as well as doing their own set they supported guitar hero CHRIS SPEDDING. CHRIS recommended the band to his then record company, RAK. The band's debut single "WE VIBRATE" came out in November (one of the first punk singles) and was followed two weeks later by CHRIS SPEDDING'S "POGO DANCING" single with the VIBRATORS as the band on that.In their long career the VIBRATORS have toured with the likes of IGGY POP (with DAVID BOWIE on keyboards), IAN HUNTER, THE FLAMING GROOVIES, DIE TOTEN HOSEN, and have had their songs covered by THE EXPLOITED, UK SUBS, GBH, REM, DIE TOTEN HOSEN, to name but a few. Now in 2011 the band celebrate THIRTY-FIVE YEARS of making records and touring heavily, in 2010 the band did more than 130 gigs. Get ready for many more years of PURE MANIA!https://thevibrators.bandcamp.com/ New Rocket Union - New Rocket Union has been impressing audiences with their unique brand of stripped down rock n roll since 2015. Their 2017 self-titled album captures the power duo’s energy and ferocity with hooks that are sure to get stuck in your head. New Rocket Union plan on supporting the latest album while writing and recording new material in the upcoming year.Rock 'n Roll/ Garage Punk from Minneapolis, MNhttps://newrocketunion1.bandcamp.comDoors at 6:30 / Show at 7:30$10 Advance / $13 Day of Showat Lookout LoungeALL AGES - Everyone must have a valid ID. Under 18 needs to be accompanied by a parent or guardian or have a notarized parental permission form: http://www.lookoutomaha.com/parental-consent-formALL SALES ARE FINAL. NO REFUNDS.For show/venue info go to: www.lookoutomaha.com

About artist The Vibrators

The Vibrators are a British punk rock band that formed in 1976.