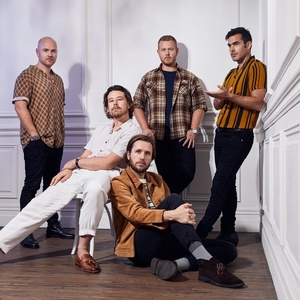 Upcoming events: 50
Subscribers:  0
My Rock Shows — search for concerts and buy tickets in more than 50 countries.
Join us
Sign in
Follow us on social media

Here you can find all upcoming Boy & Bear concerts. If the concert schedule is not right, please contact us and we will add a gig of Boy & Bear in 2022 or 2023 in our database.

Click the "Subscribe" button and get notified by MyRockShows about Boy & Bear upcoming events. Explore this page to find details of upcoming events of Boy & Bear, including the venue address and tickets cost.

Boy & Bear are an Australian indie folk band formed in 2009, consisting of David Hosking (vocals and guitar), Killian Gavin (vocals and guitar), Tim Hart (drums and vocals), Jonathan Hart (vocals, banjo, mandolin and keyboards), and David Symes (bass). The band has released two EPs and four studio albums. The first two albums, Moonfire (August 2011) and Harlequin Dream (August 2013), reached the top ten of the Australian albums chart. Their third album, Limit of Love, was released on 9 October 2015, in Australia, New Zealand, the United States, and Canada, and on 30 October in the UK and Europe. On 27 September 2019, after a four-year break, they released their long-awaited fourth studio album, Suck on Light.

Into It. Over It.