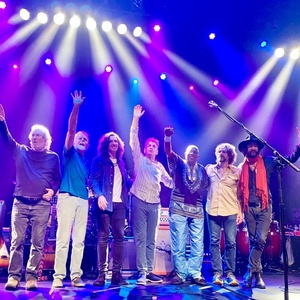 Upcoming events: 30
Subscribers:  0
My Rock Shows — search for concerts and buy tickets in more than 50 countries.
Join us
Sign in
Follow us on social media

Here you can find all upcoming Little Feat concerts. If the concert schedule is not right, please contact us and we will add a gig of Little Feat in 2022 or 2023 in our database.

Click the "Subscribe" button and get notified by MyRockShows about Little Feat upcoming events. Explore this page to find details of upcoming events of Little Feat, including the venue address and tickets cost.

Little Feat is an American rock band formed by singer-songwriter, lead vocalist and guitarist Lowell George and keyboardist Bill Payne in 1969 in Los Angeles. George disbanded the group due to creative differences shortly before his death in 1979. Surviving members re-formed Little Feat in 1987 and the band has remained active to the present.

The band's music is a mixture of rock and roll, blues, country, R&B and jazz.