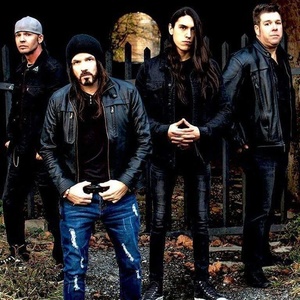 Here you can find all upcoming Silvertung concerts. If the concert schedule is not right, please contact us and we will add a gig of Silvertung in 2021 or 2022 in our database.

Since blazing onto the rock scene, Silvertung have proven that hard work, grit and great songs are still the recipe for success in the competitive hard rock landscape. The band has amazed fans and critics alike by hitting the Billboard Mainstream Rock Radio Chart four times with their singles – “Never Too Late,” “Face The Music,” “You & Me,” and "Done My Best."

Success hasn’t come easy for this Mid-Atlantic quartet, comprising of vocalist Speed Vincent, lead guitarist Codey Red, bassist Sam Sour, and drummer Boma Jaxx. They found their way on the rock scene the old-fashioned way – one show at a time. Continuously performing in and around the Mid-Atlantic area, the band built a tremendous regional buzz on the strength of their live show which led to opening spots with such heavy weight artists as Godsmack, Disturbed, Shinedown, Slipknot, Staind, Papa Roach, Buckcherry, Filter, Drowning Pool, Anthrax and P.O.D., among others.

This buzz caught the attention of Grammy nominated producer David Ivory (Ivory Productions), who invited Silvertung to a session at his secluded Dylanava Studios in Gwynedd Valley, PA. Focusing on songwriting and arrangement, Ivory’s unorthodox style worked for Silvertung and the collaboration spawned the band’s first radio break-through hit “Never Too Late,” which hit the Billboard Top 40 Mainstream Rock Chart.

From there, the group went on to write and record Out Of The Box, which was produced by Steven Wright (Slipknot, Mars Volta, Rihanna), and resulted in the chart-topping hit singles “Face The Music," "Never Too Late,"and “You & Me."

In 2017, Silvertung took a departure from the roaring drum beats and hard guitar riffs they were known for and released Lighten Up, an all-acoustic album that featured stripped down and re-written versions of their biggest hits. It was quickly embraced by fans and critics for its raw emotion and honest look behind Silvertung’s tough facade. A riveting DVD documentary was released soon after to accompany the album.

In 2019, Silvertung delivered another heavy release, (But At What Cost??!), showing the band has no limits to their talent. The first single, "Done My Best, " landed the band back on the Billboard Top 40 Mainstream Rock Charts. During the recording process, their latest release evolved into a concept album, unlike a typical concept style. It's a story that is now unfolding, as the events in 2020 continue to essentially bring the world to it`s knees.