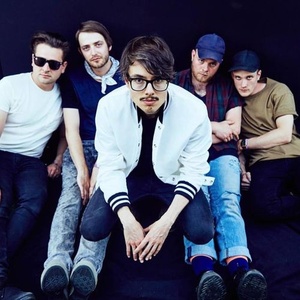 Here you can find all upcoming Joywave concerts. If the concert schedule is not right, please contact us and we will add a gig of Joywave in 2021 or 2022 in our database.

Click the "Subscribe" button and get notified by MyRockShows about Joywave upcoming events. Explore this page to find details of upcoming events of Joywave, including the venue address and tickets cost.

Please contact us in case you see a mistake in Joywave events dates or if MyRockShows is leaving out any of Joywave upcoming gigs.

Joywave is an American indie rock band from Rochester, New York, consisting of members Daniel Armbruster (vocals), Joseph Morinelli (guitar), Sean Donnelly (bass), Benjamin Bailey (keyboards), and Paul Brenner (drums). The band first became known for its collaboration with electronic music project Big Data, "Dangerous", which peaked at number one on the Billboard Alternative Songs chart in 2014. After releasing two EPs, their debut album, How Do You Feel Now?, was released on Cultco Music/Hollywood Records in 2015. Their second album, Content, was released on July 28, 2017.

Alternative Rock Classic Rock
They are subscribed to this band